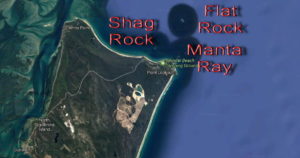 Stradbroke Island is the massive barrier island bordering Moreton Bay. It lies close to and just south of Moreton Island. It boasts a number of dive sites that offer a varied seascape and level of diving.

Flat rock is at the extreme northern tip of North Stradbroke Island. The rock protrudes above the water and is generally bathed in clear, blue water. Here the reef teams with pelagic fish life, school of kingfish, jewfish and taylor can be seen on any one dive. At certain times of the year the non-aggressive grey nurse sharks pass by and dwell for a time in the gutters running from the Rock.

On its outer edges underwater bommies drop off to form ledges and caves cascading down to sandy gullies that often house harmless leopard sharks and large shovel nosed rays. Lots of smaller life is found in the cracks and crevices of the Rock, even though fixed marine growth is not as plentiful as at other nearby sites. Still, there is much to see, observe and photograph. Ranging from 5 – 30 metres it suits new and experienced divers alike.

This fantastic spot is the place to observe in awe the magic and grace of that gentle giant, the Manta ray. At certain times of the year multitudes of Mantas patrol this coral bommie that rises out of the sand at around 18 metres up to 10 metres.

When the Mantas are out of season there is still plenty to see with the normal myriad of marine life. Turtles, octopus, cuttlefish, morays, shovel nosed rays and tropical fish all call this bommie home.

Shag is an excellent dive site to finish off a day’s diving or for the novice diver.  The area is liberally covered with sea urchins.  The area has a myriad of smaller sea life such as cuttle fish, squid, morays.

The site also sports a very nice swim through that is safe unless the sea is running.  If there is a sea running, the surge in the swim through can be a little daunting.