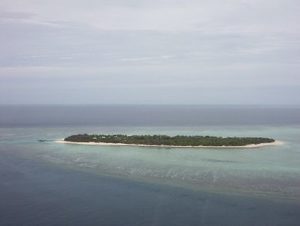 Quoted From Wikipedia, the free encyclopedia.

Heron Island is a coral cay located near the Tropic of Capricorn in the southern Great Barrier Reef, 80 km north-east of Gladstone, Queensland, Australia, and 460 km north-north-west of the state capital Brisbane. The island is situated on the leeward (western) side of Heron Reef, a fringing platform reef of significant biodiversity, supporting around 900 of the 1,500 fish species and 72% of the coral species found on the Great Barrier Reef.[2]

Access is via boat or light aircraft.  If diving, it is strongly recommended to use the boat.  It is cheaper and will not have the weight restrictions that a light aircraft has.